JUBILEE TOUR ACROSS THE SEA 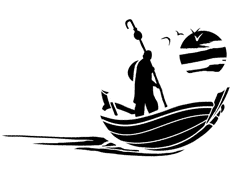 HISTORY OF THE TRASLATIO TOUR

The Traslatio Tour or Fluvial-maritime Jubilee Tour across the Mar de Arousa and the Ulla River honours the arrival of Saint James’ remains to Galicia, after his torture and death in Jerusalem.

Ancient Christian traditions state that St. James’ disciples, Theodore and Athanasios, accompanied the Apostle’s remains from Jaffa, a southern port city near Tel Aviv-Yafo, to Galicia. They sailed across the Mediterranean Sea and the Atlantic Coast of the Iberian Peninsula up to the Ría de Arousa and the O Grove peninsula.

They followed the course of the Ulla River and the Sar River to end at the Roman harbour of Iria Flavia, in the vicinity of Padrón. They moored the boat to a “Pedrón”, a Roman altar which is kept in Santiago de Padrón Parish Church. St. James was buried in Liberum Donum hill, in a place vaguely named as Arcis Marmoricis.

Both the municipal stamp of Padrón City Council and a coin found at the necropolis of Adro Vello recreate the iconography of the disciples on a boat lead by an angel.

ORIGIN OF THE TRASLATIO TOUR

The Mar de Arousa and Ulla Jubilee Tour Foundation promotes the yearly Traslatio celebration, which is carried out by the end of July and the beginning of August. A colourful maritime-fluvial procession that departs from different harbours in the Ría de Arousa and ends at Pontecesures and Padrón. This maritime procession is attended by a growing number of visitors every year who enjoy the route on the beautifully festooned boats.

The celebration is supported by the Jubilee, harbour authorities, the parish of Santiago de Padrón and, ship-owners and fishermen from the area.

THE STATIONS OF THE CROSS ACROSS THE RÍA DE AROUSA

Seventeen stone calvaries, which are located at the bottom of the estuary and at both shores of the Ulla River, mark the route of the only fluvial-maritime stations of the cross in the world. The first two calvaries marked at the Traslatio Tour are in Malveira Grande Island and in the north point of Cortegada Island. The traditional architecture of these calvaries shows, the crucifixion of Jesus Christ on one side of the stone cross and, Virgin Mary on the other side.

You can find out more about which cookies we are using or switch them off in settings.

This website uses cookies so that we can provide you with the best user experience possible. Cookie information is stored in your browser and performs functions such as recognising you when you return to our website and helping our team to understand which sections of the website you find most interesting and useful.

Strictly Necessary Cookie should be enabled at all times so that we can save your preferences for cookie settings.

If you disable this cookie, we will not be able to save your preferences. This means that every time you visit this website you will need to enable or disable cookies again.